“We can be as one tonight.”

A full 342 days after his band’s concert was officially announced, Bono finally sang those words to a near sellout Aloha Stadium crowd as U2’s long and winding Vertigo tour came to a monumental close last night.

Over two-and-a-half-hours and 24 U2 classics, the lead vocalist of America’s favorite rock band from Dublin sang to, preached to and occasionally reached into the masses trying to to move them spiritually, politically and emotionally.

A concert equally as entertaining as it was massive in scale and execution? Definitely. A rock show perhaps a bit too tightly choreographed in the theatrics and special effects department? Kind of.

But such grand-scale proceedings were nothing unexpected from a band long proficient in moving stadiums with the exacting professionalism of brain surgeons at the top of their skills. 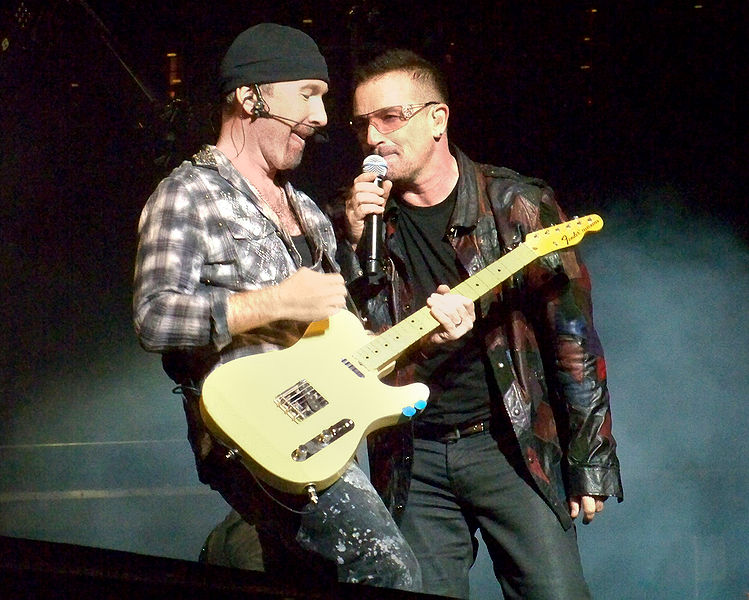 Bono and The Edge of U2 at Gillette Stadium, Foxboro, MA 9/21/2009. Photo via Wikipedia Commons by xrayspx

A crawl of every date on the Vertigo tour on a towering stage-length LED wall of light behind them, U2 slowly emerged from the shadows to begin the show. Guitarist the Edge offered subtle riffing, with drummer Larry Mullen Jr. and bassist Adam Clayton building tight rhythm.

And finally, there was Bono — appearing from the shadows on one of two long audience-extending catwalks, waving an American flag and kicking things off with the soaring “City of Blinding Lights.” Dressed entirely in black with his now signature wraparound sunglasses snug, he wasted little time leading U2 through an entirely satisfying run through its illustrious song catalogue.

“Vertigo,” “Elevation” and “I Will Follow” kept the crowd’s energy up early on. After launching a sea of clapping hands on the stadium floor, Bono urged the gathered to “Take it to church now” by singing along to “I Still Haven’t Found What I’m Looking For.”

Rock solid as always, Clayton, Mullen and the Edge got deserved audience props whenever they took a solo or ambled down the catwalks into the crowd. (Each barely said a word the entire show). But it was clear from his first note and response to every word or act that followed that Bono held the bulk of the crowd’s attention and affections.

A shout out to O’ahu’s North Shore and a slight change of a “Beautiful Day” lyric to “Honolulu right in front of you,” by Bono? Roars. Switching an “Angel of Harlem” verse to “New York like a Christmas tree/Tonight Honolulu belongs to me” accompanied by a wide smile? Even louder roars.

Other highlights early on:

Through it all, U2’s innovative and massive wall of light LED screen and two raised video screens delivered animations, visuals of the band and other images to the farthest corners of Aloha Stadium, creating a surprising intimacy in the huge venue.

“Love and Peace or Else” effectively launched a seven-song suite of politically-charged U2 faves bridged by the politics of Bono. Donning a headband with symbols representing Christianity, Islam and Judaism partially spelling out the word “coexist,” Bono dedicated “Sunday Bloody Sunday” to U.S. military personnel. He finished with his now ritual hoisting of a little child from the crowd on stage to chant the song’s “No more!” coda.

“Bullet the Blue Sky” ended with Bono crawling down one of the catwalks blindfolded by his “coexist” headband, finally lighting a bright red flare — the only moment in the set and show that came uncomfortably close to unfortunate political parody.

Thankfully, the band redeemed itself with an inspired finish of “Pride (In the Name of Love),” “Where the Streets Have No Name” and “One,” rounding out the main set. Prior to “One,” Bono asked the crowd to hold their mobile phones aloft and text the Make Poverty History organization. Their freshly added names were later scrolled on the stage’s giant LED screen.

U2 offered a couple of apologies during the evening for the show’s postponement. (The final 10 concerts of the Vertigo tour, including the Honolulu finale’s original April date, had been postponed due to an illness in the Edge’s immediate family.)

The crowd roared that it was all OK. Bono then turned to the Edge and thanked him for staying strong.

“For a carbon-based life form, this cat can play,” said Bono.

A first encore that featured crowd favorites “The Fly,” “Mysterious Ways” and “With or Without You” preceded a second encore that finally brought the concert its first wonderfully little-rehearsed suprises.

Green Day’s Billie Joe Armstrong appeared on stage at Bono’s request to accompany U2 on guitar and vocals for both band’s hit “The Saints Are Coming.” Welcomed back after Pearl Jam’s incendiary hourlong opening set, vocalist Eddie Vedder and guitarist Mike McReady rocked with Bono & Co. on a cover of Neil Young’s “Rockin’ in the Free World.”

The spectacle of Bono and Vedder sharing a spontaneous dance on stage and McReady and the Edge trading soaring solos even had Kid Rock nodding his head and Anthrax’s Scott Ian air guitaring with friends in a field level sound booth.

Done co-leading a stadium-wide “We love the Edge!” chant with Vedder, Bono broke from script and motioned the band for one more song. With just Bono, the Edge, Mullen and Clayton on stage, U2 ended its Honolulu visit quietly with the lovely “Rattle and Hum” ballad “All I Want Is You.”

The song slowly coming to an end, each member disappeared from the stage with a wave. First Bono, then Clayton, then a final note from the Edge, until Mullen, bringing his beats slowly to a close, was the only soul left on stage.

“Thank you for waiting,” he said, clearly moved. “See you soon.”

No group hugs or bows for U2 at the end of another long road trip. They were ready to go home.