Tales From the Tap

The idea was simple and enticing. Take The Night Stuff on a downtown Honolulu bar crawl of my own design and write about the good, the bad, and the ugly of what I find. If possible, bring back receipts.

With a rough idea of places to visit and an empty notebook, I took off on a seven-hour tour through a handful of downtown Honolulu watering holes on a recent Friday evening in search of stories. So, stop me if you’ve heard this one before.

This guy walks into a bar … 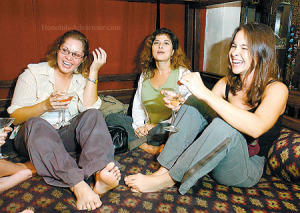 “You have absolutely no clue how lucky you have it! Absolutely no plausible clue!” scolds Paul Cox. “That’s how it always is with you Americans.”

It’s the final 60 minutes of Martini Madness, a four-hour, pau-hana party celebrating the joys of half-priced specialty martinis. And the Londoner’s accent is so prissily upper-crust that later, after Cox shuffles off to the loo, another patron at Indigo’s crowded outside bar pulls me aside to ask how it feels to be chastised by “Prince Charles himself.”

Cox is a fresh English arrival, still enthralled with everything from his purple-orchid-lei greeting that morning to the pulp in his lunchtime guava juice. I’m carping about a sweltering, trade-wind-free Friday afternoon quickly turning into an evening promising similar charms.

Driven by a bravura no doubt coaxed by the effect of several long- gone martinis on his portly English-winter-hardened frame, Cox calls the puny weather complaints of anyone from Hawai’i “piffle.” He insists on buying me a martini, though — for apology’s sake.

I refuse, politely. His brow furrows into large dermal canyons. I let him order. 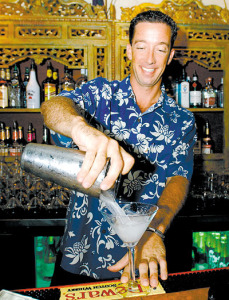 “Hi!” says Sandy, warmly welcoming me as if I’d walked in a thousand times before. A handful of post-fortysomethings near the bar crane their heads, give me the once- over and return to their Bud Lights and pupu.

Beyond lived-in, Club Pauahi is all about darkened neon-lit atmosphere, faded red carpeting, mismatched furnishings and a jukebox pumping Doobie Brothers, War and Jackson 5. I half-expect Starsky & Hutch to burst in and shake down Huggy Bear for the word on the street. Instead, a middle-aged patron boogies at her table to Rick James’s “Super Freak.”

“You … are a beautiful lady. Better than the young ‘uns,” says a similarly-aged Romeo in a loud aloha shirt, fine-tuning his mack-daddy approach. Ms. “Super Freak” is about as unfazed as a patron nearby shifting a half-lucid gaze between television sets spewing ESPN, “Boston Public,” and a Korean cooking show.

“What young ‘uns?” she says, scanning the room and erupting in cackles. “You’re better off keeping that … in your pants tonight, boy.”

Another jukebox. Another big-screen television on ESPN. And a chubby young woman in a red tank, blue jeans and backward white visor warbling Whitney Houston’s “Heartbreak Hotel” beneath a halo of scarlet bar lighting.

At song’s end, the lounge’s seven or so male patrons offer scattered applause before diving back into conversations and Kools. The woman’s equally serious rendering of Mana’o Company’s “Drop Baby Drop/Who Loves You Pretty Baby” is followed by a downright scary four minutes of All-4-One’s “I Swear.”

Finishing her set, she downs the last of her Bud Light, hands me the remainder of her pupu (popcorn and pickled vegetables) and bolts. Oddly enough, the bar clears soon after. 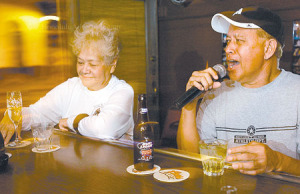 As the jukebox fades Melveen Leed’s “Komo Mai, Come Together” into Bread’s “Make It With You,” Alison starts telling me the story of his life.

“You know that song, ‘Alison?’ ” he asks, staring into my eyes for added emphasis. “Elvis Costello wrote that song for me.”

“I met Elvis Costello when I was the best drag queen on Kalakaua Avenue. It was a long time ago.”

The significance of this tale on written rock ‘n’ roll history might carry more weight with me if Alison wasn’t an older gentleman sporting crisp night-out-in-Chinatown duds, slicked-back hair and a face eerily similar to my late grandfather’s. He even seems sober.

Alison is as serious about being “Alison” as he is about meeting Margaret Thatcher in Waikiki several years later. A fiftysomething female slouched over a table raises her head briefly as Mariah Carey croons about everything being “just a sweet sweet fantasy, baby.” Bartender Bill Lyman pops the cap off an ice-cold Coors Light. 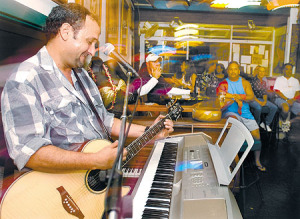 I’ve got the best seat in the house — a table offering a raised view of Hanks brightly-lit, wall-to-wall crowded environs, and the goings on out on Nu’uanu Ave.

Late-evening entertainment Jimmy & Dave — a trio, go figure — are setting up, floor-level, smack in the middle of imbibing patrons. A guy in the crowd starts singing “Freebird” for no apparent reason. My server cheerfully promises me “some Billy Joel, some old-time rock ‘n’ roll” from Jimmy & Dave, but I ask the guys themselves.

“Well, what do you want to hear?” asks Jimmy. Or Dave.

What do you play?

Bob Seger then. Anything by Bob Seger.

A kicky opening cover of Paul Simon’s “Me and Julio Down by the Schoolyard” is followed by a lullaby of acoustic guitar introducing “Night Moves.” I wave kudos from my table. Jimmy, or Dave, smiles back.

My partner in Night Stuff joins me for the remainder of my evening. She insists I need something nonalcoholic. I agree.

A couple dozen patrons are spread out in O’Toole’s airy, moodily lit, wood-and-brick-walled interiors. Most hang near the bar, chatting or cursing a rugby match on TV. Those Guys, a duo on acoustic and electric guitars, stroll through nicely done covers of Creedence Clearwater Revival’s “Who’ll Stop The Rain,” Tom Petty’s “American Girl” and Hank Williams’s “Your Cheatin’ Heart.”

A table of guys we recognize as Palomino Restaurant staff, just off from work and downing Amstels on a neighboring table, answer a call for requests with Lynyrd Skynyrd’s “Simple Man.” Those Guys give the song a shot, but come up empty.

“You wanna come up and do it?” the acoustic strummer asks, smiling. Everyone settles for a serviceable cover of “Sweet Home Alabama” instead.

Our server, Tatiana Ejmont, helpfully volunteers some bars we should hit on our walk — most of which we’d been to — and tells us stories of O’Toole’s regular clientele. She apologizes, hoping O’Toole’s isn’t a bit too mellow for us tonight.

No one writes songs like Van Morrison’s “Into The Mystic” anymore. 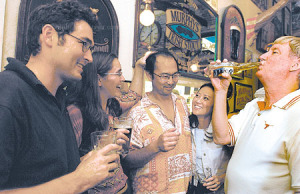 Somewhere in the middle of 40 or so young males trying to outshout one another, a handful try their best to sing along to Dire Straits’ “Walk of Life.” ELO’s “Telephone Line” absolutely confounds them.

“Can I have nine flaming Dr. Pepper shots?” asks one of the guys, leaning over the bar. Bartender Wayne Larrow sets up a row of fresh shot glasses, pouring a mixture of Bacardi 151 rum and vermouth in each. The shots are quickly downed. Manly hugs and a few belches follow. The pleasant aroma of freshly brewed coffee also drifts by.

Alcohol-free since Smith’s Union, I debate the smarts of having another drink. In six years of patronage, Murphy’s bartenders — Larrow and Jonathan Schwalbenitz, in particular — haven’t once offered me a mixed concoction anything less than wicked strong and near perfect. The final stop of the evening still ahead, I decide against anything potentially menacing.

The presence of a handful of women does nothing to sway the creative swearing of a mini fratboy invasion that has just wandered in. When we leave, the women are outside, swearing like sailors as well. 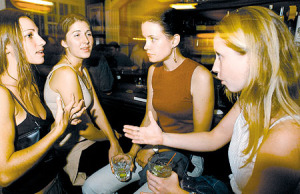 After overhearing me gripe, yet again, about the still annoying humidity outside, a patron recommends something from Palomino’s collection of designer mojito and fresh herb-infused concoctions. My pirate mojito — packed with fresh mint sprigs and various rums — is cool, tasty and altogether mellow.

Palomino’s glistening marble and brass-accented bar area is surprisingly crowded, even at this late hour. After our late-night snack is delivered — finally, after five hours and nothing but goat cheese won tons at Indigo … food! — we somehow get into a conversation with server Ari Johnson about our trip to Chicago next summer.

A Windy City native, Ari excitedly offers a list of dining recommendations from the best place for deep-dish pizza to her favorite Chicago-style hot dog. On another stop at our table, she helps plan much of our day excursions as well.

Sated and tired a half-hour later, we pay our bill and prepare to leave. The crowd has trickled down to four guys at the bar doing vanilla vodka shots and talking football. The bar staff offers thank yous, goodbyes and wishes of a safe drive home.