A “Chat” with Prince

The artist formerly known as The Artist Formerly Known As Prince opened up — sort of — to select members of the Honolulu media yesterday afternoon at Blaisdell Arena.

The occasion for the one-on-one interviews, scheduled only hours earlier? Boosting apparently sluggish ticket sales to the musician’s concerts tonight at the Blaisdell Arena and Friday at the Maui Arts & Cultural Center.

But while Prince may have wanted some fast press, he wasn’t about to avoid calling the shots. And so, denied permission to document our meeting with video, tape recorder, or even a paper and pen, The Advertiser arrived empty-handed for a 15-minute sit-down with Prince in his dressing room before an early evening rehearsal.

“Who’s the first patient?” the musician asked, switching glances between two invited journalists. I motioned the competition to sit for his one-on-one first. 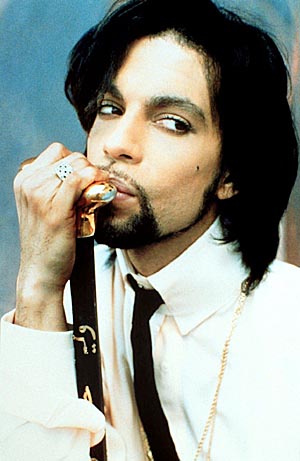 The artist once again known as Prince said in a quick interview that he most enjoys his yearly visits to his Maui home because he likes the people and ‘nobody’s frontin’ in Hawai’i. Advertiser library photo.

Prince had casually strolled into a backstage crew room seconds earlier. Diminutive and wispy thin, the artist still managed to look comfortably stylish in a tan silk shirt with thin colored stripes and tan slacks. His open shirt, unbuttoned past his chest, revealed some serious chest hair and a thick gold medallion the size of a drink coaster.

Prince shook our hands and seemed eager to start chatting. Though sporting only a touch of makeup, he looked in person at least a decade younger than his 45 years.

Fifteen minutes later, in Prince’s dressing room, a photographer moved around the artist, his New Power Generation drummer and me like a hawk circling prey. As the photographer snapped away, Prince settled comfortably on a couch across from me and talked about his Maui home.

He said he had visited the residence once a year for the last four years, “always around the same time.” He confessed that he most enjoyed his annual visits because he liked the people and “because nobody’s frontin’ ” in Hawai’i.

Fond of occasionally dropping unannounced into Maui nightclubs to catch — and sometimes sit in with — local musicians, Prince even remembered being moved enough to surprise O’ahu reggae band Natural Vibrations with an on-stage guitar instrumental at Kihei’s Bada Bing! in December 2001.

On the subject of his recent selection for induction into the Rock And Roll Hall of Fame, Prince commented that while the nomination was something of an honor, such awards were “not important to me” in the overall scheme of things. The honor, he said, was being in the company of musicians already inducted. Prince said he would perform at the March 15 induction ceremonies in New York, if invited, but felt sorry “for whoever they choose to go on after me.”

Longish tendrils of dark hair framing his forehead danced as he chuckled at his comment.

The testiest moment of our chat came when I quizzed him about his recent decision to do “hit-loaded” live shows after years of virtually ignoring audience favorites on stage. This was also when I found out that Prince does indeed read his own press.

“I’m not doing it because I need the cash,” Prince said sternly, after commenting on news stories (including one I’d written for The Advertiser’s TGIF section last Friday) that suggested the artist was looking to feather his retirement nest egg with the guaranteed cash of a “greatest hits” tour.

He pointed out that he already had more money in his bank account than he needed, thanks to ownership of the publishing rights for his vast hits catalog and new music created outside of his famously strained relationship with former record label Warner Bros.

Recent hit-heavy shows, he said, were practice runs designed to prepare his New Power Generation band for larger American and international tours planned for the near future. The shows were purposely scheduled in Hong Kong, Australia and Hawai’i to keep them “far away from the press and the cameras,” Prince explained.

But he still hadn’t explained why he wanted to dive deeply into his hits catalog in a live setting after so many years. So I asked him … again.

“You’ve asked me that in three different ways,” Prince said testily. “Why do you think I’m playing the songs?”

I answered that I didn’t know.

“You know why,” he insisted.

I assured him I didn’t, and asked him to explain. He was visibly uncomfortable, searching for an answer; it was best to move on. I chose a query about music he was currently grooving to.

His brown eyes widening with very real pride, he mentioned musical projects that members of New Power Generation were working on.

After copping to a fondness for the track “Powerless” from Nelly Furtado’s recently released CD “Folklore,” Prince shook my hand and I exited the room.

Later, as I was being denied permission to watch his rehearsal and to commit my mental notes to paper within Blaisdell Arena, I noticed Prince alone by the freight entrance, dancing to blasts of live funk drifting from NPG’s dressing room. His lithe frame swayed gently to the beat. His designer shoes tapped loudly on the Blaisdell’s concrete floor.

As I exited, a Blaisdell security guard informed me, “You’re lucky, man. I haven’t seen anybody talk with him alone like that yet. Was he cool?”