Power to the Poke!

Poke is about more than just ‘ahi.

Sure, the default iteration of the popular Hawai‘i food favorite uses fresh tuna as its main ingredient as opposed to, more, shall we say, exotic poke like raw crab, mussel, clam and kimchee. But for folks who truly love poke, the idea that you can “poke anything” is the very reason for its infinite appeal. (The Hawaiian word poke—pronounced “poh-keh”—refers not to the dish itself, but “the act of slicing, or cutting crosswise into pieces,” a preparation method, which most poke recipes require.) If your poke experience thus far is limited to ‘ahi, we’re here to help. We asked five Hawai‘i chefs to push the poke boundary by sharing their favorite anything-but-‘ahi poke recipes. Then we sat down to chat about the history behind each concoction and our chefs’ poke bonafides. Prepare to do some shopping … and poke eating. 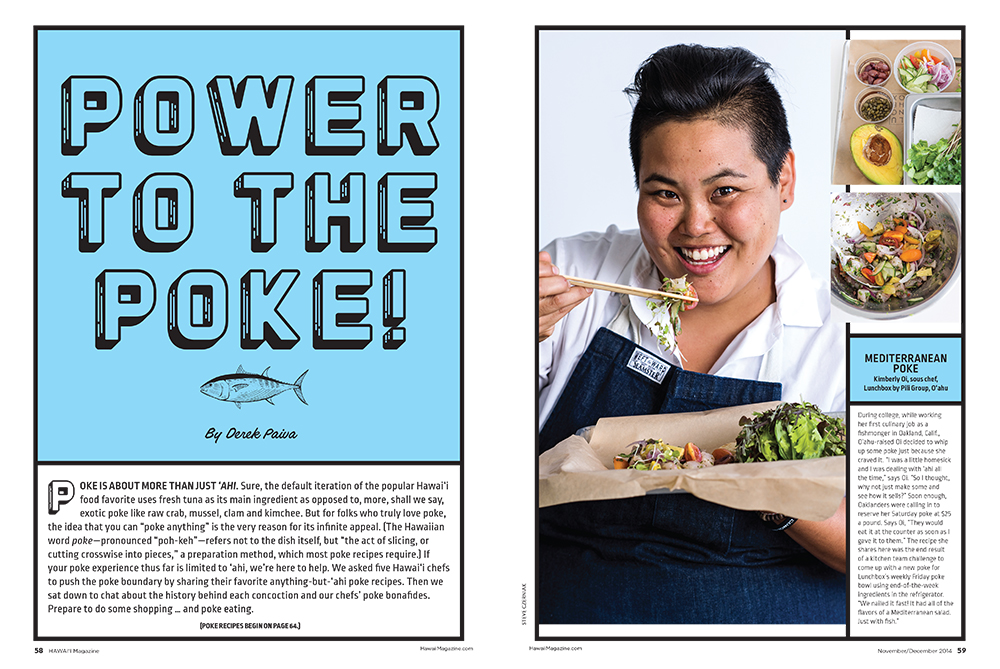 During college, while working her first culinary job as a fishmonger in Oakland, Calif., O‘ahu-raised Oi decided to whip up some poke just because she craved it. “I was a little homesick and I was dealing with ‘ahi all the time,” says Oi. “So I thought, why not just make some and see how it sells?” Soon enough, Oaklanders were calling in to reserve her Saturday poke at $25 a pound. Says Oi, “They would eat it at the counter as soon as I gave it to them.” The recipe she shares here was the end result of a kitchen team challenge to come up with a new poke for Lunchbox’s weekly Friday poke bowl using end-of-the-week ingredients in the refrigerator. “We nailed it fast! It had all of the flavors of a Mediterranean salad. Just with fish.”

Bancaco’s first memory of poke is eating fresh-caught kala (unicorn fish) with his Maui fisherman grandfather as a kid. “Nobody eats kala anymore. It’s too fishy and tastes like limu (reef seaweed) whether you want that or not. But when you go to Grandma and Grandpa’s house, you don’t really get a choice of what you want to eat. It’s on the table. You’re going to try it.” Introduced young to poke made with reef fishes, whose diet is largely limu, he took quickly to the pungent flavor. “I had the bottom of the barrel first,” he says proudly. “‘Ahi would come later.” Bancaco’s “Hamajang” onaga (long-tail red snapper) poke recipe is inspired by the Tahitian ceviche dish poisson cru and his favorite Maui-made hot sauce. “A couple of dashes go a long way,” he warns, smiling. 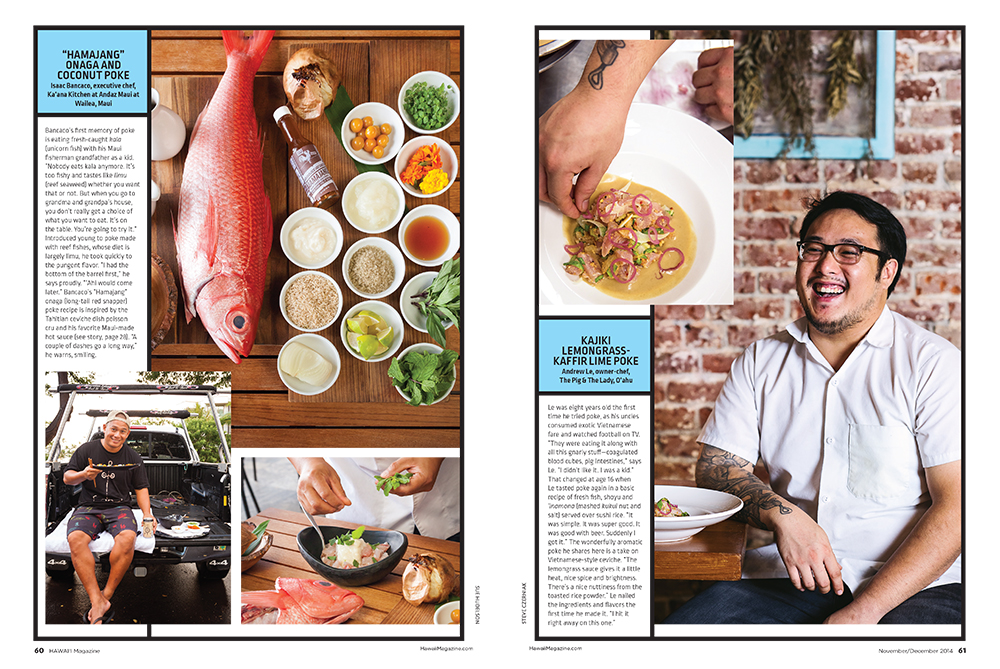 Le was eight years old the first time he tried poke, as his uncles consumed exotic Vietnamese fare and watched football on TV. “They were eating it along with all this gnarly stuff—coagulated blood cubes, pig intestines,” says Le. “I didn’t like it. I was a kid.” That changed at age 16 when Le tasted poke again in a basic recipe of fresh fish, shoyu and ‘inamona (mashed kukui nut and salt) served over sushi rice. “It was simple. It was super good. It was good with beer. Suddenly I got it.” The wonderfully aromatic poke he shares here is a take on Vietnamese-style ceviche. “The lemongrass sauce gives it a little heat, nice spice and brightness. There’s a nice nuttiness from the toasted rice powder.” Le nailed the ingredients and flavors the first time he made it. “I hit it right away on this one.”

The sweet, tiny freshwater river-caught shrimp served still alive and leaping in the popular Filipino dish jumping salad was Abad’s poke inspiration here. “The shrimp was dumped on the table. We’d have a bowl of spicy vinegar, calamansi and salt. We would catch the shrimp, dip it in the seasonings, scoop it with rice and eat,” says Abad. His recipe uses cooked, non-jumping shrimp, but stays true to the dish’s flavor, mixing in other jumping salad ingredients. “The amazing thing for me about poke is the simplicity of the dish’s roots and how complex it can get while always reverting back to that simplicity,” says Abad. His favorite poke ingredient? “I like good salt. When I’m eating poke and I get these crunches of salt, I just want to dive right into the ocean. If you have great salt, everything will fall into place.” 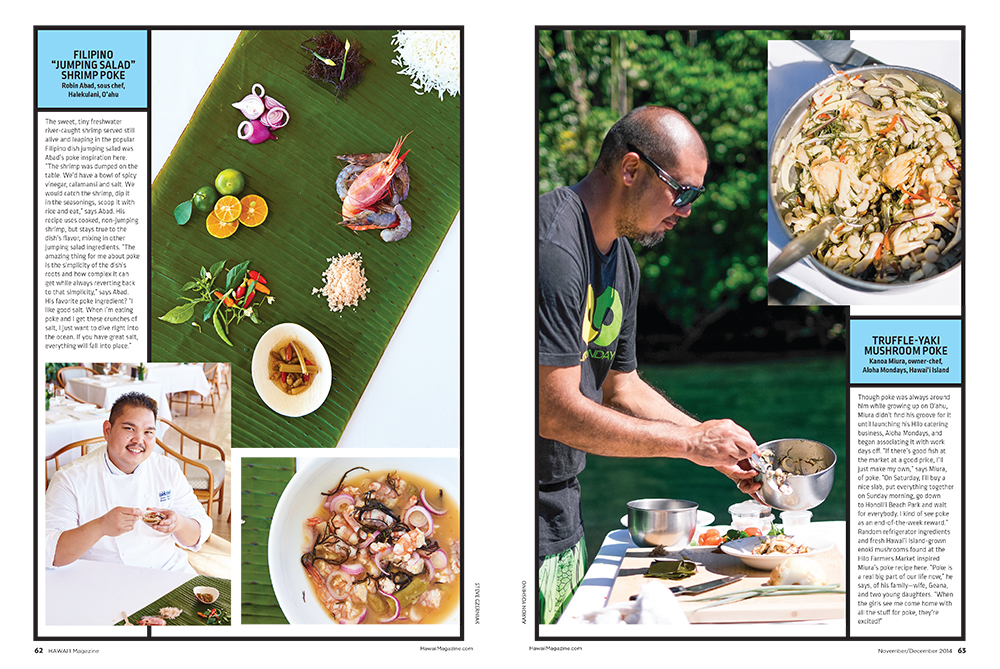 Though poke was always around him while growing up on O‘ahu, Miura didn’t find his groove for it until launching his Hilo catering business, Aloha Mondays, and began associating it with work days off. “If there’s good fish at the market at a good price, I’ll just make my own,” says Miura, of poke. “On Saturday, I’ll buy a nice slab, put everything together on Sunday morning, go down to Honoli‘i Beach Park and wait for everybody. I kind of see poke as an end-of-the-week reward.” Random refrigerator ingredients and fresh Hawai‘i Island-grown enoki mushrooms found at the Hilo Farmers Market inspired Miura’s poke recipe here. “Poke is a real big part of our life now,” he says, of his family—wife, Geana, and two young daughters. “When the girls see me come home with all the stuff for poke, they’re excited!”