Singer speaks about life, stealing and her alias 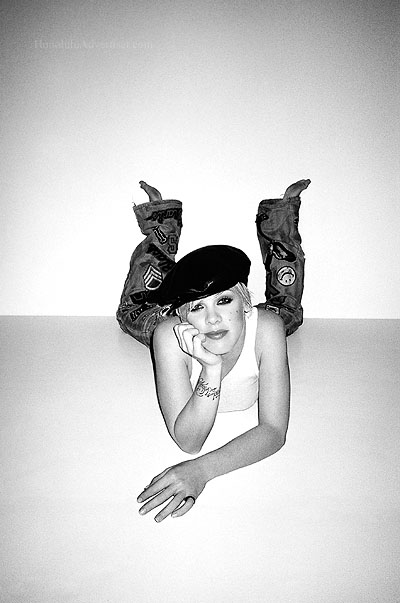 Pink, born in Pennsylvania to working-class parents, now has an income in the millions (we’re guessing). The pop star will perform in Honolulu Wednesday night. Publicity still.

It’s 10 p.m. in Adelaide, Australia (1:30 a.m., Hawai’i time), and Pink misses her dog. Modesty prevents me from printing the name of her beloved Jack Russell terrier, but it might help to know the name comfortably rhymes with the word trucker.

“I miss my doggie,” she says, mournfully. “I miss (expletive), my dog. He’s the best little (same expletive) dog. I love him.”

Happily ensconced in her hotel room, having left a concert stage only 20 minutes earlier, Pink apologizes for the timing of her call.

“Sorry it’s so late there,” she says.

Or early, I reply, drawing the first of several throaty cigarette-and-beer-tinged laughs during our chat.

Even with a clearly spent, somewhat tired voice that casts some real doubt about her plans to head downstairs to the hotel bar for a beer after we talk, Pink seems in good spirits.

Her teenage-girlish voice and in-a-rush-to-grow-up choppy sentence structure quickly become her second-most-endearing quality — the first being an honesty-at-all-times policy she learned from her father, which keeps her answers to my questions unusually obliging, candid and blunt.

When Pink is happy, her voice carries the gleeful bounce of the teenage Aerosmith junkie who last year got a “yes” from Steven Tyler when asked if he would sing on her second album. When Pink is sad or serious, she sounds more like the teenage Bon Jovi fan who cried in her room for a week after Jon had the nerve to get married.

“It sucks, but I’m moving to the Valley,” says Pink, glumly, about a post-tour move from her much-loved (but rented) beach house in Venice, Calif., to a home she recently bought in L.A.’s San Fernando Valley.

Asked why, she replies, “Because that’s what I can afford,” cracking herself up, as if the answer should be that freakin’ obvious. “I can’t really afford Venice beach houses. God, they’re ridiculous. To live on the beach is, like, $16 million and you don’t even have a driveway!

“I’m from Pennsylvania. You can get a county for $16 million out there.”

Born Alecia Moore in Doylestown, a working-class burgh on the outskirts of Philly, Pink is the daughter of parents who split up when she was 7. She lived with her mother, Judith, and brother until age 15, when she was carted off to live with her father, Jim, after becoming too much of a handful.

Among the teenage crimes for which she was busted: running away from home, drinking, breaking into the home of a girl who had stolen her diary and was pasting its pages all over school, and stealing a copy of “Showgirls” from Blockbuster Video.

There were also “shopping bags and trash bags full of clothing from department stores,” says Pink. “I know that sucks to say now because of poor Winona (Ryder), but, yeah, I did it successfully and it was very easy for a while.”

I guess you’d get into trouble for telling me where you stole from, wouldn’t you?

“Macy’s,” she coughs up instantly, her brashness and my surprised reaction to it cracking her up. “Bloomingdale’s. You name it. Whatever.” She pauses for a bit for a half-baked attempt at being a role model. “But stealing’s not good, so I don’t promote it.”

Luckily, Pink also had some other useful childhood talents. As a teenager, she sang in punk and hip-hop groups and even toured with a break-dancing team in Philly-area clubs.

And “once I started gaining a conscience” around age 16, Pink says she settled down, abandoned school and set her sights on a music career. Eventually signed to LaFace Records as part of a doomed female R&B trio called Choice, Pink jumped at label president L.A. Reid’s suggestion that she go solo. Reid immediately connected her with producers like Daryl Simmons and She’kspere for her first CD, 2000’s “Can’t Take Me Home.”

The CD was an out-of-the-box smash, generating sales of more than 2 million copies and spawning Billboard Hot-100 hits from the catchy — though largely generic — dance pop tracks “There You Go,” “Most Girls,” and “You Make Me Sick.”

When not vibing to her riot-grrrl-lite anthems of boys doing girls wrong, TRL-aged wannabes gravitated to videos portraying her as something of a scorned biker chick in need of some serious anger-management classes.

“With ‘Can’t Take Me Home,’ I wasn’t really in full control. It was really left up to the producers and my record company,” admits Pink, who still managed to contribute lyrics to much of the CD. “I was in a bad relationship and had an attitude, so that’s what most of the songs were about.”

After collecting still more career clout teaming with Christina Aguilera, Lil’ Kim and Mya on 2000’s chart-topping remake of LaBelle’s “Lady Marmalade,” Pink wanted — and knew she could get — the power to explore more personal subject matter on her second CD, “M!ssundaztood.” Not that getting it would be easy.

The 14 songs Pink turned in for the CD contained their share of the hit-ready beats and lyrics the singer was known for. But “M!ssundaztood” also was full of deeply personal compositions laying bare her emotions and stories of her life. “Don’t Let Me Get Me” paints a picture of the singer’s occasional battles with inadequacy and self-loathing. The decidedly radio-unfriendly “Family Portrait” is an oft-times brutal recanting of Pink’s less-than-idyllic upbringing and stormy teenage years.

“It was just what I thought music should be,” Pink says of the writing process for “M!ssundaztood.” “It was just sitting on a floor, drinking beer, crying and laying it all out.”

For lead producer and co-writer, Pink selected her longtime music idol Linda Perry. The former lead-singer of 4 Non-Blondes, Perry had all but abandoned the music industry after her band’s solitary (and let’s face it, whiny) 1993 hit “What’s Up.”

The powers that be at her label Arista — in particular, label head Reid — weren’t exactly tickled about Pink turning in something that wasn’t quite “Can’t Take Me Home, Part Deux.”

” ‘Can’t Take Me Home’ worked for what it was, and I guess there is that industry rule: If it ain’t broke, don’t fix it,” says Pink, understanding Arista’s trepidation. “Most record companies wouldn’t let an artist completely 360 because that usually doesn’t work. But I wanted it really, really bad. And it was believable.”

In spite of Arista’s better judgment, the label gave in and sunk major cash into promoting “M!ssundaztood,” released in late 2001. The dance-friendly — if largely mind-numbing — first single “Get The Party Started” turned out to be exactly the kind of can’t-miss Top-5 smash the label expected.

What was a surprise to Arista execs, however, was the CD’s near-unanimous praise from music critics — many of whom had largely written off Pink as a one-note dance-pop act. Also a surprise: the radio successes of “Family Portrait,” “Don’t Let Me Get Me” and the rock-oriented “Just Like A Pill.”

“M!ssundaztood” has so far sold 4 million copies, and is still in the top quarter of the Billboard Top 200 album chart after one year.

Who was more drunk at the MTV Video Music Awards — Pink or Michelle Branch?

“I think that girl was completely sober,” says Pink, gamely agreeing to answer a couple of e-mailed questions from her Honolulu fans.

At the August awards show, Pink colored her acceptance speech for Best Female Video with an admission that she was, well, pretty (expletive’d) up. “I caught a lot of flak from saying that, but it was true. It was just shocking to stand up there in front of all those people … looking at me like I was nuts. And I was just way too drunk to deal with something like that.”

So much for being a role model. Next question.

Did you really take your alias, as you told Playboy, from a certain part of your anatomy, or did it come from other circumstances you’ve mentioned in the past? (For those keeping score at home, these include: a family nickname, the former color of her hair dye, the color of her cheeks when she blushes, and Steve Buscemi’s “Mr. Pink” character from Quentin Tarantino’s “Reservoir Dogs.”)

“You know, it’s funny, they’re all true,” says Pink, giggling mischievously. “But yes, that (first one) is also true.”

Get some sleep, Pink.