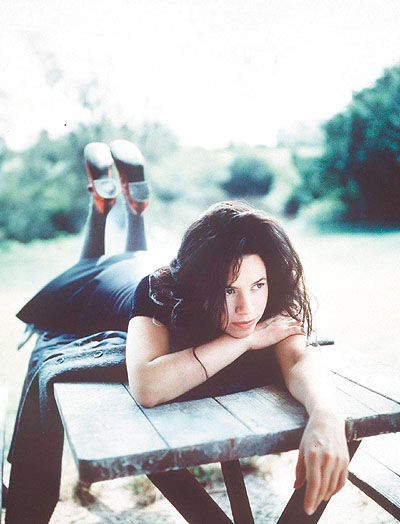 Natalie Merchant’s new album “Motherland” is a reflection of American culture and pop music inspired by her travels in Europe. She performs the first of her three Hawai’i shows Wednesday in Waikiki. Advertiser library photo

“Newspapers ask intimate questions … want confessions,” goes a line in one popular Natalie Merchant composition. And today, Merchant, the music fan, is asked to fess up on a few musical guilty pleasures.

“I’d say Bob Seger,” muses Merchant, giggling, over a phone line. “If a Bob Seger song comes on the radio I tend to turn it up and listen to it. I like ‘Against The Wind.'”

How about “Night Moves”?

“Yes, ‘Night Moves,'” says Merchant, before trilling loudly in her oh-so-unique voice — part achingly heartbreaking, part joyously folk — a favorite line from the song. “Started hummin’ a tune from 1962!” Merchant pauses. “I don’t know if it’s a prophetic statement of how bad radio is that if Bob Seger comes on I get excited. But if you listen to the production of a Bob Seger song, it’s very pure.”

Merchant is sitting on the front porch of a rented cottage on Kaua‘i’s north shore, where she has been vacationing since New Year’s; her three-island concert tour begins Wednesday in Honolulu. Soft spoken yet talkative, self-effacing yet intellectually opinionated, Merchant exudes all the happily relaxed ardor of someone with absolutely nothing to do but paint, embroider, read, and walk the beach. We start with a discussion of her latest CD, 2001’s “Motherland.”

“I did a lot of traveling outside of the United States,” says Merchant, explaining the album’s writing in the fall of 2000. “And any kind of travel outside of your country makes you think of it in a different way, and see it in a new light, a new perspective.” Merchant rented a keyboard and roamed Europe for four months, writing and soaking in the music she encountered. “I wasn’t listening to a lot of recorded music, but I was able to see people performing music casually,” says Merchant. One particular dingy little industrial town in northern Spain called Reynosa impressed her most.

“Every other time I’d been there it was a little on the verge of depressing,” says Merchant. “There was no beautiful castle on the hillside or anything. And you kind of wondered why people ended up living there.” One Sunday morning, Merchant walked into a town festival.

“There were all these people doing these traditional dances in the square to an accordion player and a drummer,” says Merchant. “Some of the women were in their 80s, but they looked like they were 14 years old again. It really made me think of music in a different way. It just completely removed me from the music industry and recorded pop music. Here was a living tradition and something that animated people, so unified them as a culture, and made them feel like they shared something.”

Merchant says she reflected on the dearth of that kind of musical spontaneity in current American culture — save for line dancing or karaoke.

Recorded last summer, “Motherland,” Merchant says, started with a theme ruminating the perspective of being an American. Its compositions touch on America’s politics, music, news headlines and strange knack for breeding eccentrics, outcasts and outsiders. The album’s tour is something of a Merchant career retrospective.

“We do the songs we like,” says Merchant. “There’s a lot of covers, the Maniacs’ greatest hits, and some obscure songs that I just like.”

Though her solo repertoire has grown considerably in the nine years since her split from the jangly hippie folk of 10,000 Maniacs, Merchant still enjoys playing the hits that introduced her to the pop mainstream.

“I actually still get excited when I see how excited the audience gets when we play ‘These Are Days,’ or ‘Don’t Talk’ or ‘What’s The Matter Here,'” she says, laughing. “People jumping out of chairs and dancing and … who hasn’t got time for those four minutes of ecstasy or bliss?”

With mid-day fast approaching, talk turns back to Merchant’s planned afternoon of snorkeling, her love of painting and sketching, and the stuff she always totes with her on tour.

“I carry a ridiculous amount of … I call them boredom prevention kits,” says Merchant, laughing hard. “I’ve always got some kind of reference book. A novel. An embroidery. A sketchbook. And now my computer. I’ve been teaching myself Quark because I’d like to design things in the future.”

A few of her paintings are on display at nataliemerchant.com.

“I painted this very rotund woman on the beach who fell asleep while I was painting her,” says Merchant, when prodded about her sole Kaua‘i piece. “She was sitting in a lawn chair, and was overlapping the chair. She had so much flesh, it was really fun to paint her.”