Kanye West gives good boast. Quite possibly the best in the music industry.

His bon mots include this response to a question about his reading habits: “I’m too busy writing history to read it.” 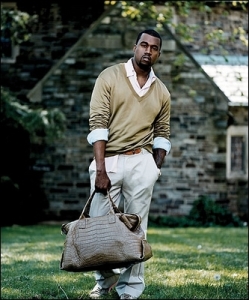 And this one, answering a query about retirement: “It would be a shame for me to stop making music, because I’m just so good.”

West chuckles when the quotes are brought up again, as if savoring a second glass from a fine bottle of pinot. I ask if he tosses off such statements because he truly believes them or because he knows people like me will eat them up and ask for more.

“Nah, I do believe it,” says the 28-year-old West. “Because think about that quote. That’s mad accurate! That’s something someone else would say.”

For the record, that might include any one of the hundreds of music critics worldwide who lavished praise on the Grammy-winning hip-hop auteur’s two albums so far: 2004’s “The College Dropout” and 2005’s “Late Registration.”

It might also include the multimillions who snatched up copies of both chart-topping discs, and the several thousand local fans anxious for West’s first Honolulu performance, Sunday at Blaisdell Arena.

“When I say it, it just comes off funny. It’s humorous to me.”

West explains a goal stretching back as far as the early aughts, when several labels passed on giving him a record deal. Way back then, label heads couldn’t fathom the appeal of a producer who, while clearly talented — he’d worked behind the boards on impressive tracks by Jay-Z, Talib Kweli, Alicia Keys and others — favored a wardrobe of decidedly nonrapper-esque Polo shirt-and-slack combos straight out of the “Official Preppy Handbook.”

“I always wanted to make the type of music that brings the critics back to when they were fans,” West says. “There’s a reason why they’re not fans anymore. And you gotta do something to get a rise out of them. (Give them) some shock value.

“Critics want to break it down, like (here, West’s voice takes on the tone of an over-educated music geek), ‘Well, Q-Tip said this line back in ’93 and that means I don’t like this now.’ ”

West acknowledges a larger collection of people he’s making music for, other than critics and hip-hop fanatics.

The most important project to West is always his next one.

“What’s coming out next, and trying to push the envelope,” he clarifies. “It’s also scary because you back yourself into this corner — this corner of being considered to be so great and innovative and everything. … The better you do, the harder your job will be the next time out.” 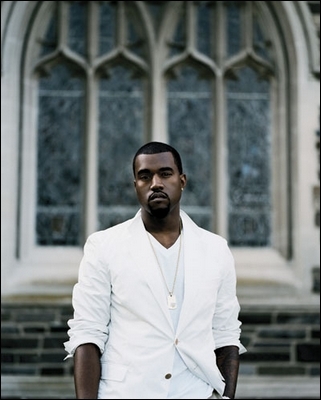 Kanye West’s not-so-hip-hop choice of wardrobe is predominantly the preppy look, but his music is decidedly platinum-selling hip-hop. Publicity photo by Sarah Friedman.

West’s legendary self-confidence carbon dates back to his childhood growing up on Chicago’s South Shore. He has a difficult time understanding how anyone could question a personality trait that should, by nature, be imprinted in one’s genetic code.

“That’s how we were raised. We were raised to feel like we could do it and not be walking around talkin’ ’bout, ‘Man, I can’t do it,’ says West. “If you think about it, the average person has lower confidence. So now when people look at me and I’m, like, ‘Yes! I did it! This is amazing! I like (my) stuff, too,’ everybody’s like, ‘Yo, what’s wrong with you? You actually like yourself?’ ”

West had strong parents in his father Ray — a former Black Panther, now a marriage counselor — and college professor mother Donda. They divorced when he was 3. He grew up as a suburban kid who went to solid schools, got art and music lessons and dreamed of being a rapper.

By 2001, West was close enough, earning a reputation at employer Roc-A-Fella Records for crafting innovative hip-hop beats out of seemingly far-flung samples. But the label still wouldn’t give him what he wanted most: his own album. That changed in October 2002, when West, asleep at the wheel of his Lexus after many late nights at work, almost died in a car wreck.

His jaw still wired shut a month after the crash, West holed himself up in a studio and recorded “Through the Wire,” mumbling lyrics at once defiantly brave and darkly comic over a sped-up chorus sample from an old-school Chaka Khan song. (One ace line: “I drink a Boost for breakfast, an Ensure for dizzert/Somebody ordered pancakes, I just sip the syzzurp.) Roc-A-Fella gave West his deal.

The discs have since dropped a collective 6 million-plus copies in the United States, primarily on the strength of relentlessly inventive, immensely listenable hits like “Through the Wire,” “Jesus Walks” and “Gold Digger.” The CDs have been nominated for 18 Grammys and won six.

THE EGO HAS LANDED

Kanye West and I are talking about Fiona Apple and Portishead. Specifically, about how their music influenced him while recording “Late Registration.”

“If you think about ‘Drive Slow,’ that really could’ve been a Portishead track, especially in the new video version we have with the strings on it,” says West.

I agree with him that I can hear the Portishead influence “a little bit, for sure.” This answer isn’t assured enough to satisfy West.

My answer pleases West and makes him chuckle. I ask if he thinks hip-hop needs more innovators like him — artists bold enough to step outside the genre’s comfort zones to fully absorb niche acts like Portishead, challenge fashions and hire genre-defying multihyphenates like Jon Brion (Apple, Elliott Smith, Aimee Mann) to co-produce.

“No, I don’t. Because then what would I do? How would I be different at that point?” answers West. “People always ask me what I think about the state of hip-hop. I answer, ‘Man, it’s great!’ ”

West goes on to mimic an interviewer asking him what he thinks about hip-hop artists’ failure to break new ground in the genre.

“Yes! Yes! I’m happy about that!” says West, answering himself and cracking up.

On criticism of his music: “I’m definitely my own harshest critic. … But that’s the reason why I make great music. Because I’ll shut up and play my music and find out everything bad about it. I’m all over it for days and days and weeks … until it’s as good as it can be before it comes out. … It’s, like, ‘Do you realize how far I’ve critiqued this already?’ (Critics) can say nothing.”

On his post-Hurricane Katrina statement, “George Bush doesn’t care about black people”: “I think I would’ve regretted more going (on television) and just reading the teleprompter and coming out with some cookie cutter ‘oh-everything-is-fine’ type of response.”

On his most personally controversial statement: “The scariest thing I ever said (as a hip-hop artist) was to tell people not to gay-bash. … In the black community, especially, that’s not popular opinion. … And the thing is, that is the most confident statement, I think, I ever gave, because I felt empowered enough (with) my music and my message where I could say the most taboo thing that I felt, really, in my heart. (It) was my opinion on the way we as hip-hop artists and we as black people, especially, treat gay people.”

On what’s next: “I (recently) went into the studio with Common and finished up over half (his) new album, beat-wise. So hopefully, we can drop (the CD) before September is out. … I’ve got three or four songs (for the next Kanye West CD) and I’ll see how (those) come out. (The disc will be out) definitely next year if I don’t do it by this year.”

On what’s left to accomplish: “Family. Having a wife and kids one day. Hopefully sooner than later. … To help other people accomplish their (music) goals.”

On why there’s no one he still dreams of working with: “I’ve worked with whoever I want to work with up until this point. I always wanted to (be able to) put my own stuff out, because you don’t have to argue with people. … If you look at music as a competition, then I’m the scariest person on Earth. Because all I have to do is book a session with myself.”